Lee Pitts, internationally renowned swim instructor, has become known as one of the preeminent swim instructors of our time. Pitts produced, directed, and instructed in the award-winning swim lesson video Waters: Beginners Swim Lessons for Adults and Children with Lee Pitts. He has taught thousands to swim with over 25 years of experience in the areas of swimming and water safety. Pitts, a former competitive swimmer, started his swim career with the Boys and Girls Club of America at age 6 in Birmingham, Alabama. He went on to swim for the Macline Swim Team, and the Birmingham Parks and Recreation Swim Team. At age 17, he became a Red Cross certified swim instructor and began teaching swim lessons and coaching swim teams in Birmingham. He has published 25 “swim tip” columns .

After completing Talladega College with a Bachelor’s Degree in Business and Clark Atlanta University with a Master’s Degree in Economics, he founded the Lee Pitts Swim School in Fort Myers Florida. In 1999, the Lee Pitts Swim School became Division I swim team champions in the Southwest Florida Swim League. He is in high demand to conduct swimming clinics each year throughout the world. The clinics attract swimmers and non- swimmers of all ages.

Pitts’ swim teaching reputation contributed to his selection as the spokesman for 20 swim tip television commercials for NBC affiliates WBBH and WFLA in Florida. He has been featured as a swimming expert on many TV shows including CBS This Morning and CNN Headline News. Pitts, a certified scuba diver, was inducted into the Boys and Girls Club of America’s National Hall of Fame in 1998. The induction celebrated his distinguished swim teaching career and community involvement with youth. Jet Magazine recognized Pitts as a role model for swimmers.

Waters: Beginners Swim Lessons for Adults and Children with Lee Pitts is an award-winning swim lesson video which has been included in the International Swimming Hall of Fame.

The video is a comprehensive swim lesson tutorial designed to assist non-swimmers in learning and swimmers to improve. Waters, designed for ages 5 and above, is a one hour 15 lesson video which teaches the fundamentals of swimming and water safety. It covers frontstroke, backstroke, flutter kicks, breathing techniques, floating techniques, glides, water safety tips, games and more. The video is taught in a progressive manner with lessons taught in a step by step progression. Students are encouraged to take their time and master each simple lesson before moving on to the next lessons. The video is ideal for those trying to teach others and for individuals who are attempting to improve their own strokes. It is the official swim lesson video for the Boys and Girls Club of America and the Lee County Public School system in Florida. It has received excellent reviews from many experts including Fitness Swimmer Magazine, School Library Journal, Jet Magazine, Washington Post, and the Los Angeles Times. ” Whether you want to learn for fitness, recreation or safety, there is something in the lessons for you. So grab your swim gear and let’s take to the waters”, says Pitts. 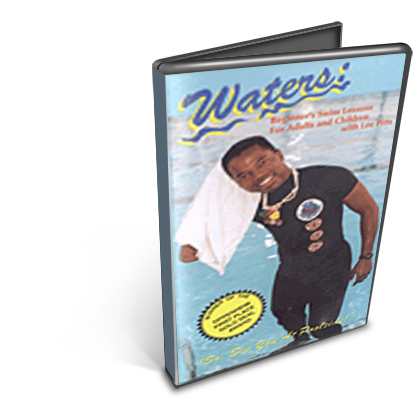